On July 16, 2015 Japan and Germany communicated an agreement in principle on a new Tax Agreement.
The Ministry of Finance Japan published on its homepage: “The new Agreement reduces taxes withheld at source on investment income (dividends, interest and royalties) to further promote the investment exchanges between the two countries.”

On August 7, 2015, Japanese Ministry of Education and Science and Technology (MEXT) announced that the success ratio of job hunting by university students graduated in March 2015 hit 72.6%, highest in the past 10 years. The last peak was 69.9% for students graduated in March 2008. In terms of volume, 409,754 newly university graduates secured job by March 2015, compared to 375,957 newly university graduates by March 2013. This confirms the labor market improvements triggered by the policy of the Abe government in the last two years.

According to Japan Office Market View Q2 2015 by CBRE, rents rose in nearly all regional cites in Japan.

Central Tokyo Grade A rents continue to rise at an accelerated pace. In our view this trend will continue and spread to other markets in Tokyo and regional cites as well.

Residential Rents on the upswing

The rent of Greater Tokyo started to grow in 2013 and continuedgrowing through June 2015.

According to an apartment rent index prepared by Sumitomo MitsuiTrust Research Institute, rents in Greater Osaka, Nagoya, Fukuokaand Sapporo were stable and gradually increasing in Q1 2015.

In December 2014, J-REITs and Private Funds collectively held JPY 27.7 trillion in Assets under Management (AuM; a plus of JPY 300 billion since June 2014), While J-REITs grew by JPY 700 billion, Private Funds decreased AuM by JPY 400 billion. The outlook for Private Funds though is positive, according to Sumitomo Mitsui Trust Research Institute, there are a number of overseas investors looking to increase real estate investments in Japan. 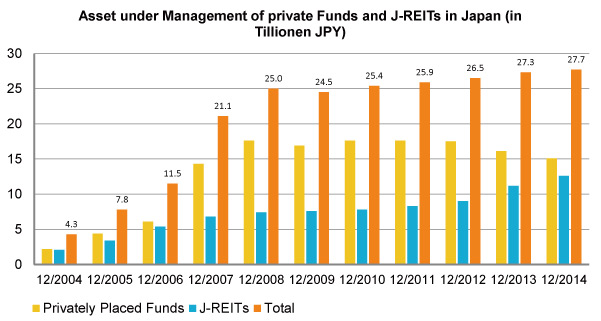